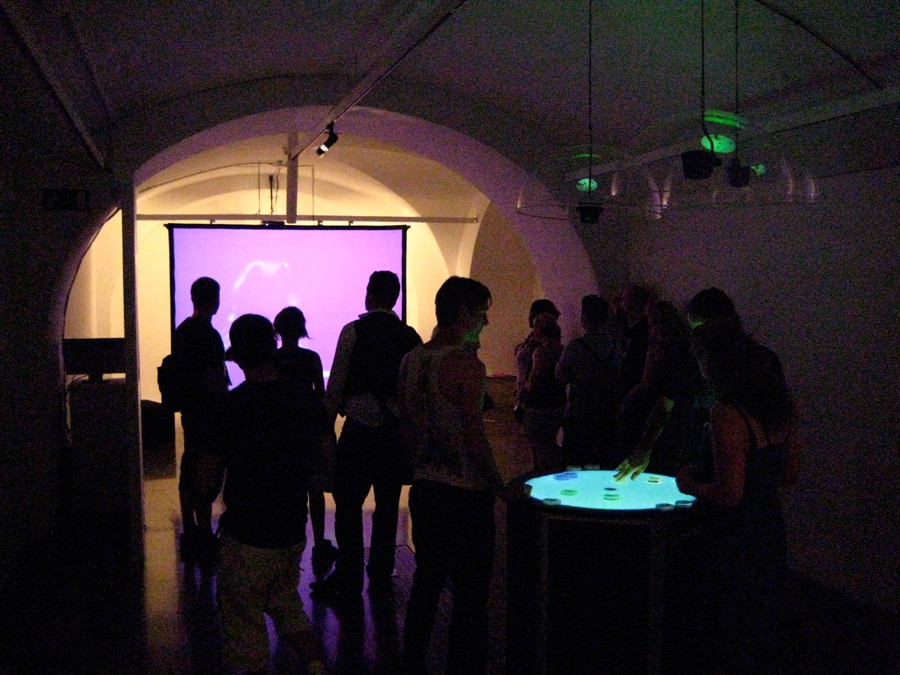 Interactive sound, graphics and performative installation, made in Barcelona with Javier Chavarri.

In WeAreWaves the relationship between the system and the interactor is immediate and intuitive. Once immersed in the space on the screen shows a curvilinear pattern that undulates in its digital container through it. This wave is reproduced as sound that fills the space and complements what is being observed. When the space is empty, the inertia of the wave takes her to rest and, therefore, to silence. This is when the participant shows that the motor of this synthesizer is its presence and begins the exploration. Interested in the relationship between image and sound, the participant acknowledges its silhouette in the image of the wave. Rapid visualization of the fluid sound becomes a digital mirror, which announces the interpreter now is his own body which creates the sound and movement forms and give only the timbre, the character and flow.

WeAreWaves is an interactive installation that propose the participant to explore the qualities of sound from the movement and shapes of your body. In other words, is a space to approach the concept of timbre as enriching the sound quality through the interface more familiar to human beings: the body itself.

The idea stems from the curiosity to investigate the features that characterize the sound timbre, as individual and complex, and at the same time, the need to study schemes to stimulate human body movement for creative purposes. It then intends to develop an interactive experience to introduce participants to the qualities of sound through movement and body shapes. Thus, WeAreWaves is presented as an audiovisual installation in which our figure and every change we make in it produces changes in the waveform of the sound generated. Thus, we can discover new features of timbre in the sound while we know ourselves and our body. In WeAreWaves the interactor becomes the sound.